I visited Miami in May 2014. I was carrying my first ever DSLR back then; Nikon D7000 with the kit 18-140 mm lens. Traveling with friends, I was super excited to be there. Miami, being one of the biggest cities in the US, I was pretty much pumped up to explore the various photographic opportunities it had in store for me. The bustle, the trendy nightlife, and not to forget the sun and sand. I was looking forward to capturing the spirit of the city, or whatever I could cover.

In this post, I’ll take you through some of my images from a place called Little Havana. I’ll share the approach and the camera settings along the way.

We took a bus ride for the city tour. It took us through some of the famous landmarks of Miami, Little Havana being one of them. The driver of the bus was friendly and allowed me a special seat at the entrance gate. I had a decent open view towards the right side of the bus. The photo (above) was taken from the bus.

I could have easily taken that image at f/8. But I failed to care back then as I was busy scanning everything that was in front of the bus, and forgot to check the settings. It’s a good practice to anticipate a scene in which you are walking into and have a suitable setting ready for your camera.

I turned the photograph black and white as there was not much color in the composition. It was harsh sunlight and I didn’t have any filters on. Even the water was washed out. 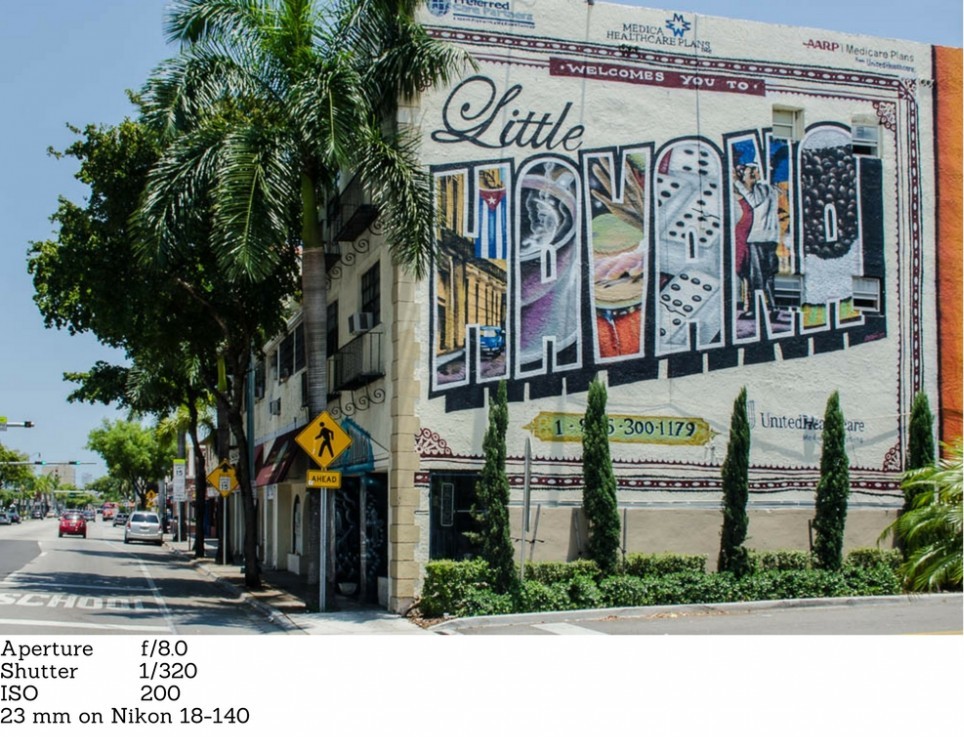 Little Havana is home to Cuban (as well as other central American) immigrants. We reached there close to midday. As we entered the neighborhood, the welcoming graffiti (above) greeted us. 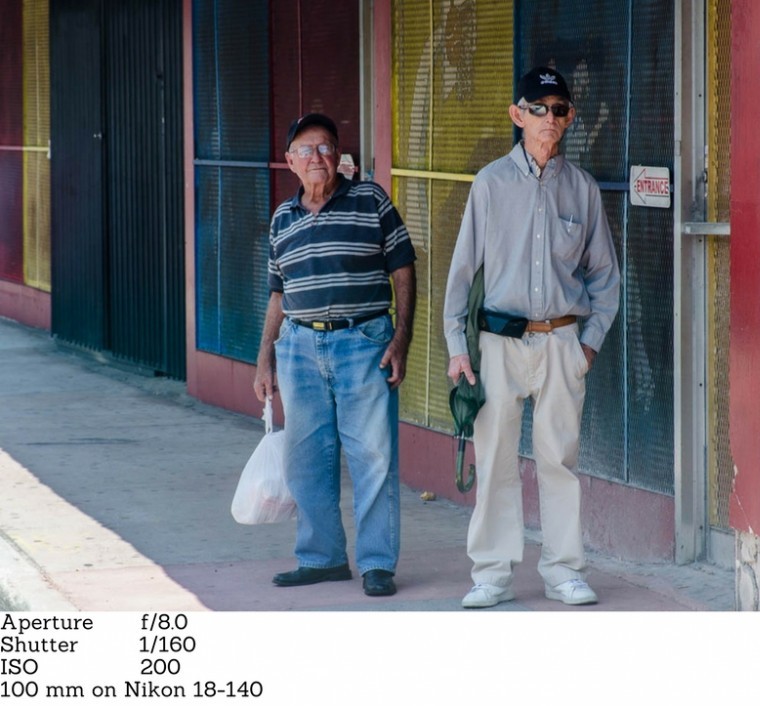 While on the road, I spotted couple locals waiting for their commute. Although there were other people around, I picked up these men (above) as they were standing in shade. Always helps to have your subject in the shade when shooting broad daylight portraits. 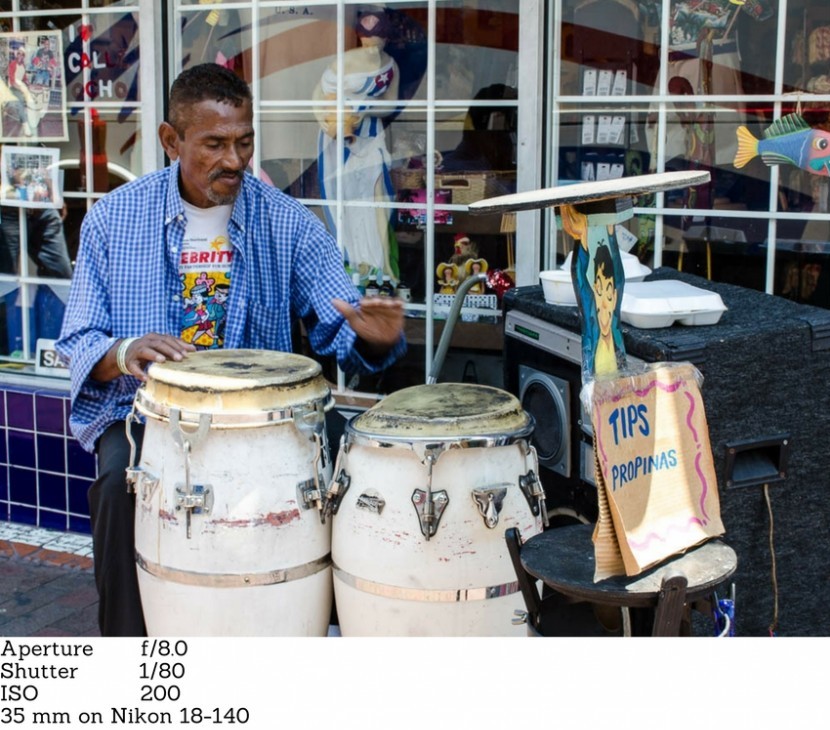 Music is everywhere in Little Havana. As soon as we got off the bus, the sidewalk performer (above) became the center of attraction in no time. I stepped in closer to get a tight shot and to avoid all the tourists surrounding him.

Once again, the subject was in the open shade, and I could have taken this photo at f/5.6 to gain a bit more on the shutter speed. But, yet again, I was not paying attention. Yeah! I know. It happens when you are fairly new on your DSLR. I improved with time, trust me! 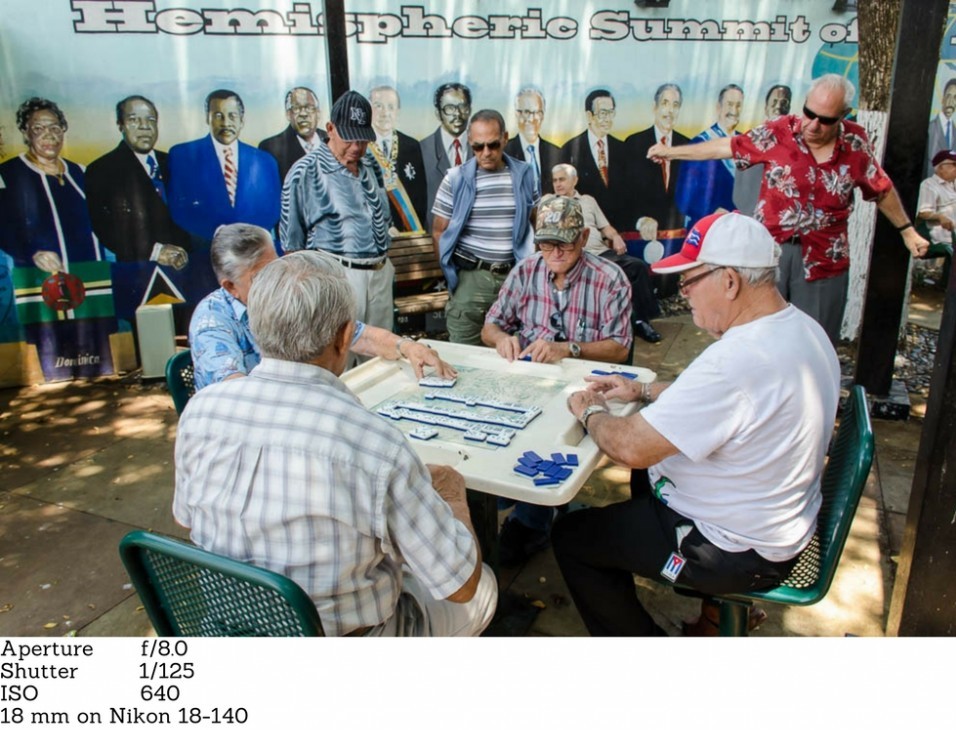 It was fun to watch the elderly men and women play Domino (popular Cuban game) at a park in the neighborhood (above image). So what, if I didn’t understand the game, their enthusiasm was worth cheering for.

I learned that the locals meet and play every day at the park. 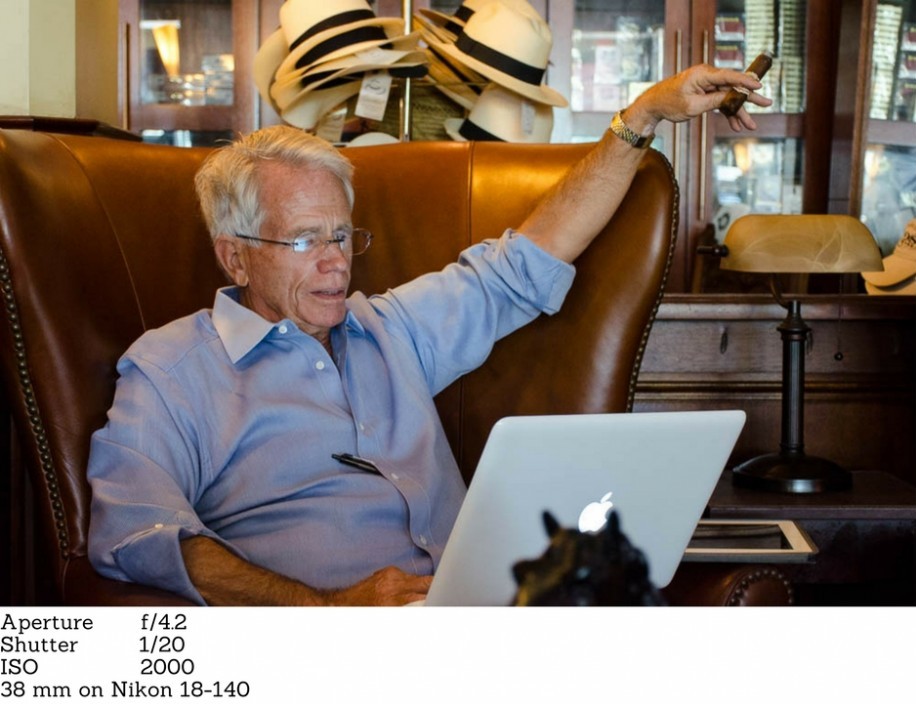 There are plenty of cigar shops throughout Little Havana. I couldn’t help spotting the gentleman (above) savoring his afternoon handmade cigar at the Little Havana Cigar Factory. I took his permission. And without bothering him for too long, took a few shots.

There was not much light. I was at the widest aperture at that focal length. I reluctantly bumped up the ISO that high, but was pleased with D7000’s performance on this one. At 1/20 sec shutter speed, I composed and waited for his hands to become still for a moment. It worked. 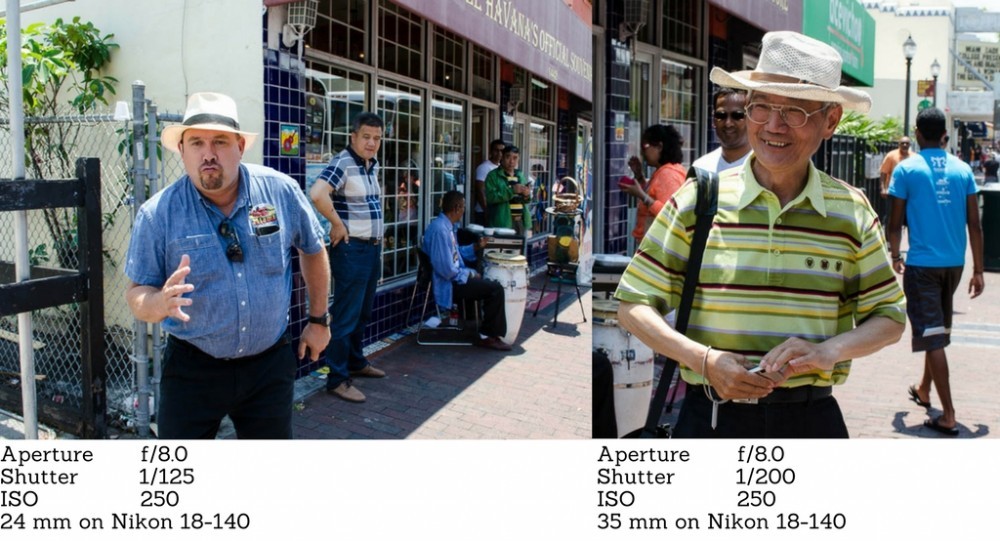 The driver of the bus was a fun sport (above left). He was an easy-to-go, informative and hilarious guy. He kept the tourists (above right) entertained, throughout our trip. Before each click, I just made sure that they are facing away from the Sun. 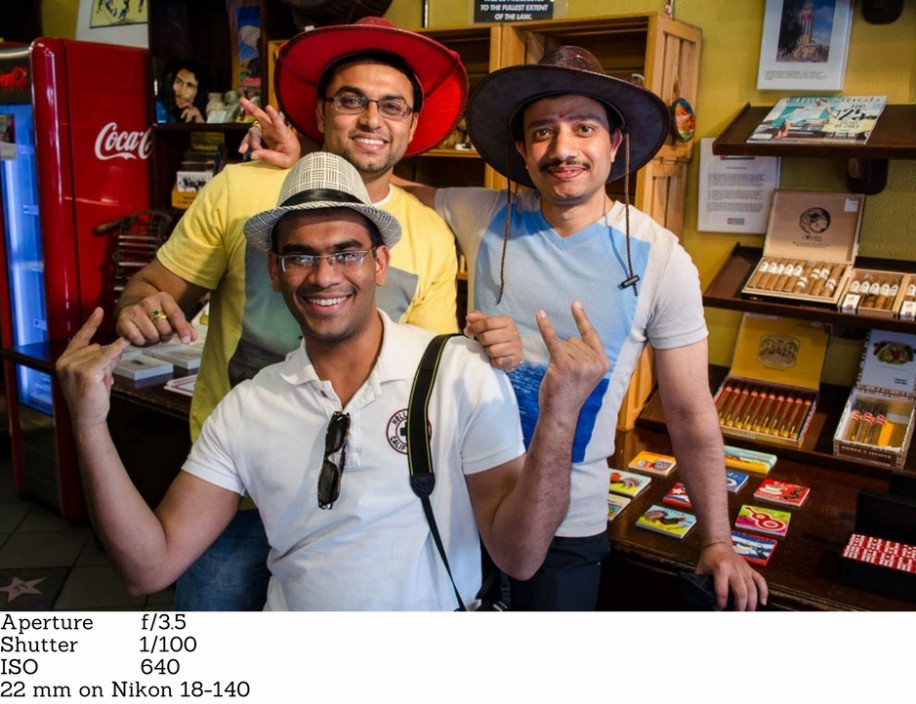 My travel buddies were having a good time, too. How could I miss them (above)? We were in a gift shop which had decent lighting. Cuban hats were on sale. So why not use them as a prop. I always try to avoid the inbuilt flash on the camera. It ruins the mood of the image. I directed them to a position so that the shop’s light illuminates their faces. It turned out pretty well.

I was carrying my camera gear in a backpack. It was heavy as I was lugging a tripod, as well. That happens with new photographers. I didn’t want to lose a single shot; even if it gets dark. That was not fun. On top of that, I didn’t use the tripod even once on that day. I was really tired by the end of the day due to all that weight on me. Lesson learned: carry only that much which you can handle all day. It’s ok to miss a shot or two. I was not on a Nat-Geo mission after all.

One good thing was; I replaced the neck strap with a camera sling strap. That really helped me to carry the camera on my shoulder all day. It helps to keep the weight off your neck.
I didn’t use any filter on my Nikon 18-140 lens. But It’s good practice to always have the lens hood on. All in all, I enjoyed the ride, the Sun, and my Nikon combo.

Please share your thoughts and experiences in the comments below.

2 thoughts on “On a summer day at little Havana, Miami”